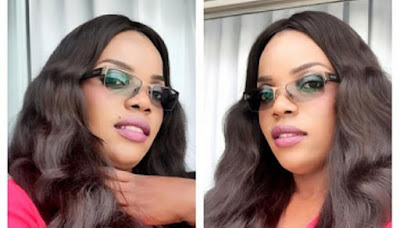 Nollywood actress, Empress Njamah, had some days ago begged fans to pray and fast for her after she went for an eye test, well, the result is out and the actress seems not too comfortable with what she was told.
The result shows that for the actress to have a balanced sight, she has to go on a glass which is what she has been avoiding for a long time.
Empress revealed that despite her busy schedule, she has been nursing an eye problem for a long time but decided to mange it through until recently while on vacation chose to visit an optician.
It seems the prayers that came in were not enough as the actress has been given a medicated glass to move around with.
She has stated that she does not have a problem wearing it but scared that she might lose it because she is always careless with her other glasses and will need a trailer full of the glasses.
“Hey guys the results are out n here I am using glasses! wanna thank all those who dropped a prayer or two! Thanks a lot! Never saw this coming though! Guess it’s for good! With these my big eyes I still take Am wear medicated bottles! I go need trailer load because I sabi loose glass well! Ok guys Na so e be ohhh!” she wrote.
Culled from Nigeriafilms.com
Spread the love